The cost to attend an NHL game in each Canadian city, ranked

Michelle Butterfield GlobalNews.ca
October 6, 2022  10:49 am
WATCH: Overcoming major adversity to make it to the NHL

In the world of professional hockey, no two teams are created equal — and according to some eye-opening data, neither are the fan experiences.

Fans across the country face huge price differences when it comes to attending an NHL game and the hit to the wallet all depends on where you go to games.

Online gambling site Time2Play has crunched the numbers of what it costs a fan to attend an NHL game in every franchise city and while it’s not exactly cheap to attend any arena, the cost of an average fan experience in some Canadian cities is nothing short of staggering.

Time2Play looked at the price for an individual ticket plus two beers, one hot dog (sadly yes, just one) and parking, adding up the cost of all four to determine their rankings.

Canada’s most expensive city, by far — surprise, surprise — is Toronto, where the cost of a Maple Leafs game is going to run a single person $240.78. In fact, Leafs’ fans pay the second-highest price to attend a game across the entire league, with only the New York Rangers having a higher total, at $247.99.

On the other side of the Canadian coin, Ottawa Senators’ fans get the best bang for their buck with the average cost of a game coming in around $123.13. But the Sens aren’t the cheapest experiences league-wide; it costs less to see the Florida Panthers, Columbus Blue Jackets, Buffalo Sabres and Arizona Coyotes. 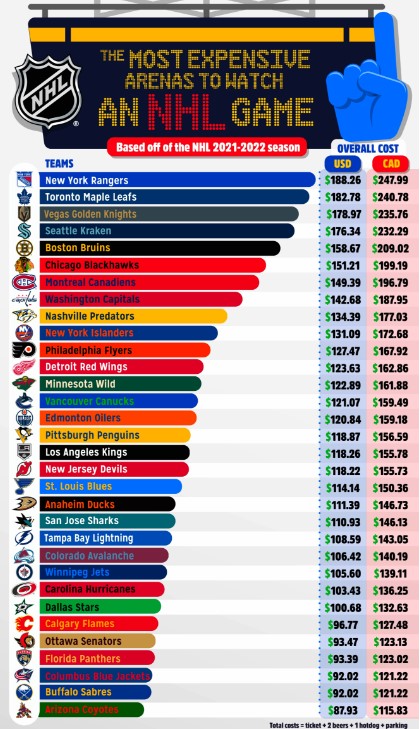 Canada’s five other teams fall somewhere in the middle, with the Montreal Canadiens coming in as the second-priciest fan experience in Canada at $196.79 per game. Vancouver Canucks fans pay the third-highest amount of Canadian NHL fans, with a cost of $159.49 per game.

Edmonton Oilers fans are paying somewhere in the middle of the pack, with a game experience going for $159.18, while Winnipeg Jets fans have the third-cheapest games to attend in Canada, costing $139.11.

Calgary Flames fans have a relatively inexpensive game-day transaction, paying just $4 more than a Senators fan, at $127.48 per game.

Time2Play’s Ben Treanor told Global News he was eager to look at the cost of attending an NHL game, as he has immense interest in hockey and is a diehard Chicago Blackhawks fan.

“I’ve noticed in the last ten years or so the cost of taking a family to a game in Chicago has grown out of control,” Treanor, a digital PR specialist, told Global News. “When you factor in parking and snacks, it wouldn’t be unusual to spend $500 or more to take a family of four to a single game — and that’s with below-average seats.”

It’s not all doom and gloom, however: Treanor said he was surprised by some of the data and pointed out that there’s great value in some locations.

“The cheapest experience on the list is in Phoenix, and that’s an awfully nice place to be in the winter months when hockey season is in full swing.”

Treanor says he hopes the NHL realizes just how quickly the average person is being priced out of attending games in-person and does something to remedy that.

“If we want today’s young people to maintain an interest in the NHL as they grow older, we have to make sure they have access to live games in their formative years so they can build those memories that last a lifetime,” he said. “I’d suggest teams offer family days more often, or even offer reduced price tickets for kids who come with a parent, just to make things a bit more affordable.” 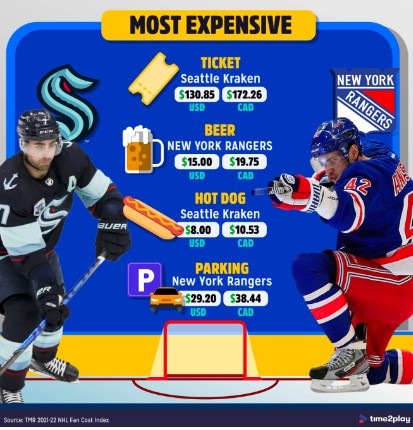 Ahead of the official start to hockey season this week, Canadians can still take solace that they aren’t subject to the league’s highest prices for beer and hot dogs.

Time2Play found that Rangers fans pay a staggering $19.75 for one beer and Seattle Kraken fans have to fork over more than $10.50 for a single hot dog.

Here’s hoping the league doesn’t pass the buck on this one.