After photos surfaced online of thousands of people crowding Trinity Bellwoods Park in Toronto over the weekend, many have raised concerns over how Canada’s green spaces can safely reopen amid the coronavirus pandemic.

But as the country begins to reopen and the weather improves, experts say there are a number of measures that can be implemented that will allow Canadians to enjoy the country’s parks while practising physical distancing.

Dr. Isaac Bogoch, an infectious disease specialist based out of Toronto General Hospital, said it will take a “multi-factoral” approach to ensure Canada’s parks are safe.

He said first and foremost, there needs to be “clear communication” from health authorities about the importance of physical distancing that is “directed towards all age groups and all demographics.”

“The messaging has to be appropriate and consistent, and repeated on a regular basis,” he said.

Bogoch said the information should be customized to different audiences.

He said there are also a number of inexpensive and creative solutions that can be implemented in parks across the country.

“So we saw, for example, parks in San Francisco just put some white circles on their green spaces,” he said. “And this is just an easy, inexpensive, effective visualization to really remind people how to physically distance themselves when using public green spaces. I think this is a great idea.”

The practice has been implemented in a number of cities across the U.S. and in Europe.

Dr. Alon Vaisman, a resident in the faculty of medicine at the University of Toronto and an expert in infection control, echoed Bogoch’s remarks, saying marking safe distances would be helpful.

“What we do in hospitals, for example, is in lounge areas or common spaces we block off chairs,” he said. “We indicate where it’s safe to sit.” 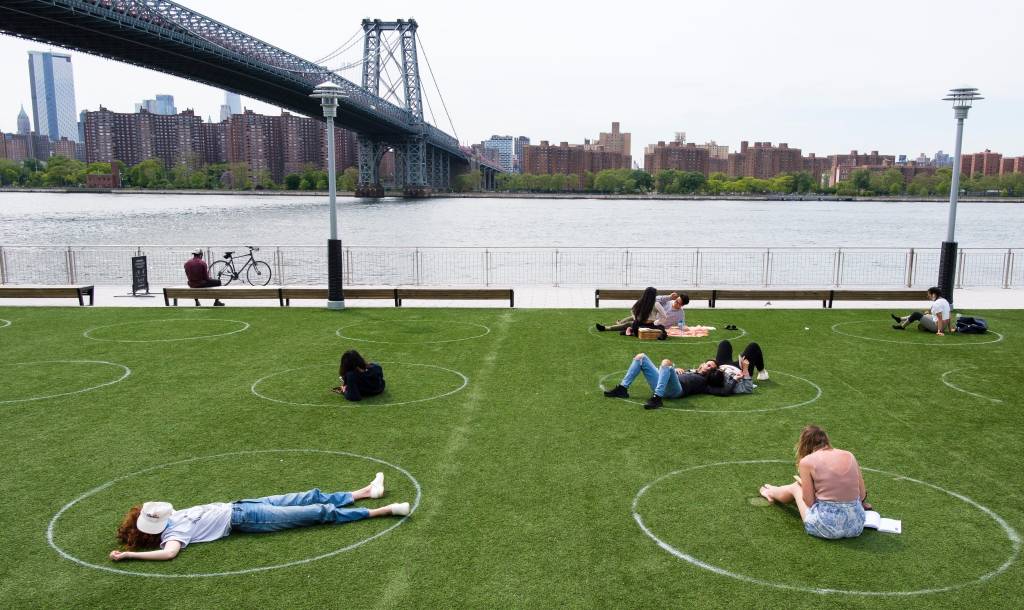 He said there is also signage with instructions on how to behave, and handwashing stations that are accessible to the public.

“It’s about thinking about the behaviour of people,” he said. “It’s easy to say people shouldn’t be doing this or that, but the hard part is actually figuring out why people are doing it and changing it in an impactful way.”

He said some things — like public washrooms — will need to be “re-imagined.”

“Lots of people sitting in a park isn’t so risky, but when those people go to the washroom in a public park, well, that’s really a problem,” he said.

Bogoch said having bylaw officers at parks could also be helpful.

He said having officers who are “friendly and helpful,” who can point people in the right direction, would be a good way to enforce physical distancing.

“These are early preventions that will likely be more effective rather than taking more punitive approaches like fining people and shutting down green spaces,” he said.

But, Bogoch said, ultimately, if Canada were to see an “unacceptable” increase in the number of new COVID-19 cases, it would be “fair” to close parks again.

“But I think we’re hopefully a long way from that and we can certainly take other measures to ensure people adhere to these public health restrictions,” he said.

Another approach, Bogoch said, could be to open parks in areas with a lower number of cases first.

“So, for example, could places like Kingston, North Bay or Thunder Bay or other places in the province open up but Toronto, perhaps, lagged behind?“ he said.

He said this approach was taken in Alberta and Quebec, where the number of cases helped determine when and where certain restrictions would be lifted.

“So perhaps those options could be helpful for Ontario because it’s clear that Toronto and the (Greater Toronto Area) is driving those case numbers up,” he said. “But the risk elsewhere in the province is extraordinarily small.”

Asked on Sunday if the city was considering closing Trinity Bellwoods Park, Toronto Mayor John Tory said it would be difficult to do, and was something the city would “rather not do.”

Instead, Tory said there would be an increased number of police and bylaw officers.

“They will be trying to educate and encourage people to do what is pretty simple, sit in small groups of five or less, with the people you live with and separate yourselves by at least two metres from other people,” Tory told Global News.

And, speaking to reporters on Monday, Prime Minister Justin Trudeau said Canadians need to remain “vigilant” and continue to practise physical distancing as the summer approaches.

–With files from the Canadian Press