A significant divide exists between the political leanings of men and women who are under 55, new Ipsos polling suggests.

Young women are much more likely to say they’ll vote for the NDP, at 27 per cent, than men of the same age group, at 16 per cent, Ipsos found.

In fact, young women support the party more than any other age-gender group, according to Ispos.

“If only young women were voting, the NDP and the Conservatives would be tied,” said Sean Simpson, vice-president of Ipsos. 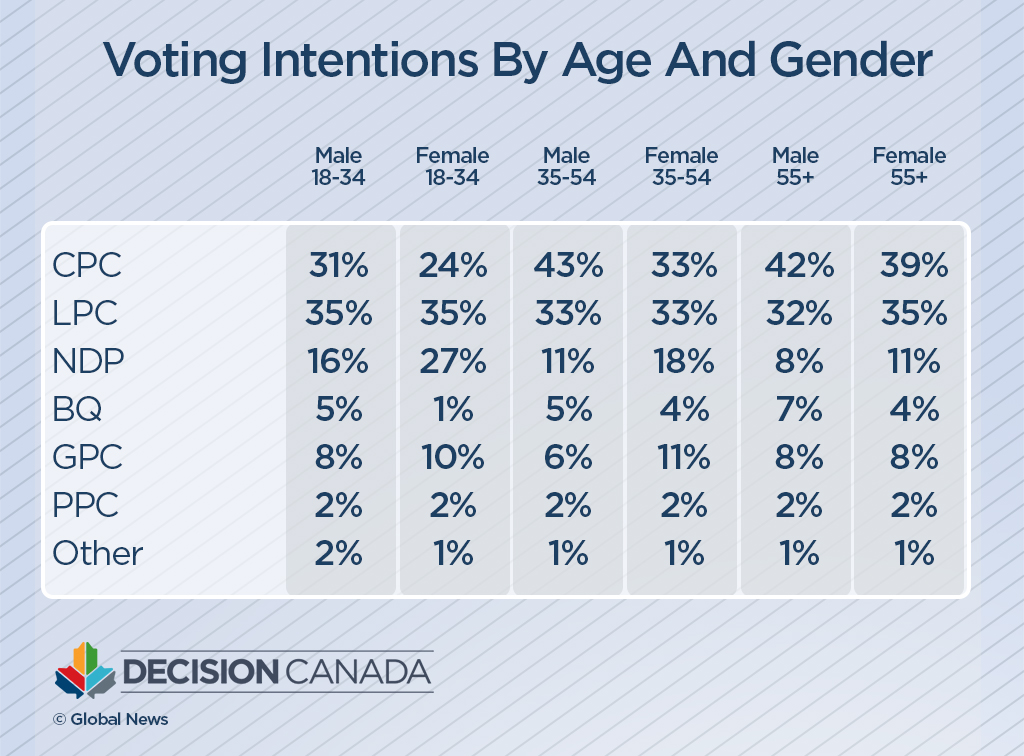 Similarly, there’s a disparity in support for the Conservative Party within the 34-and-under age group — 31 per cent of men are Tory supporters, versus 24 per cent of women.

The divide also persists among Gen Xers, those aged 35 to 54. Forty-three per cent of men support the Tories, versus 33 per cent of women, and NDP support is seven points higher among women than men in that age group.

In both age groups, there were also gender differences in levels of support for the federal party leaders. Men, from ages 18 -34 and 35-54, were more likely to support Andrew Scheer than women within those groups.

Unlike for the NDP and the Conservatives, there were no significant differences in support for the Liberal party based on gender or age, according to Ipsos.

And the gender divide collapses​ pretty much altogether when we get to the boomer generation.

READ MORE:
For the 1st time, millennial voters will make up the biggest voting bloc in a federal election

They were more likely overall to support the Conservatives, and levels of support are roughly on par, gender-wise, at 42 per cent for men and 39 per cent for women, Ipsos found.

“What that tells me is that women really become more Conservative as they age, and sort of catch up with men in terms of their propensity to vote for the Conservative Party,” Simpson said. 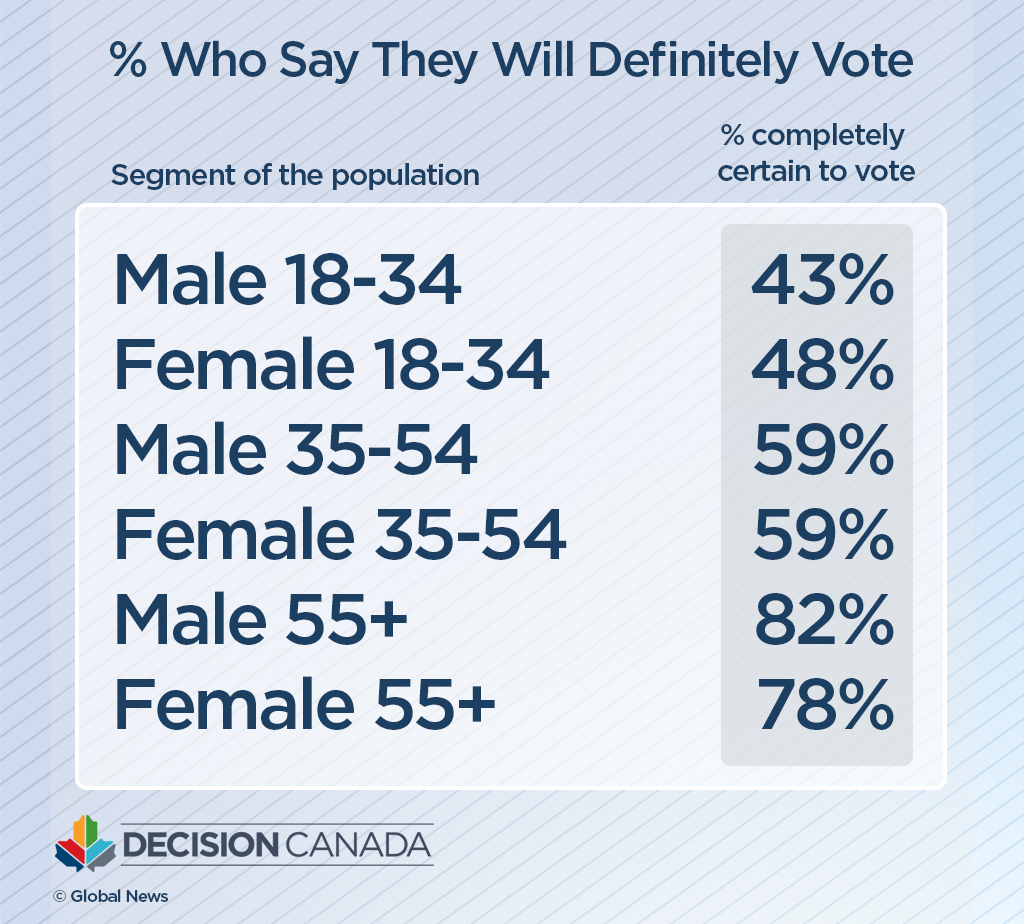 Ultimately, though, the winner of any election isn’t determined by support levels, but rather whose supporters actually turn up to cast a ballot.

Ipsos found that respondents 55 and over were by far more likely to say they would certainly be voting in the upcoming federal election — with women at 78 per cent and men at 82 per cent.

READ MORE: Promises Trudeau, Scheer, Singh, May and Blanchet have made

The polling also exposed divisions in what matters the most in this election for men and women of different ages.

Ipsos asked respondents to name the top three issues that matter the most to them in deciding whom they’ll vote for.

Though climate change and affordability were on the list of top issues for young men and women, men also chose taxes and the economy, while women chose health care and education.

Among Gen Xers, men were most likely to name the economy, taxation and health care among their top issues, while for women, health care was the top issue, then affordability and climate change.

Health care was the most commonly cited major issue for boomer men and women, though it came up as a top three issue for 48 per cent of women versus 38 per cent of men.

Of all the age-gender cohorts, older men were the most likely to say government debt and deficits were a top election issue, at 21 per cent.

“Women aren’t quite as concerned about that, and we see why the Conservative Party time and time again talks about deficits and balancing the budget as being a key goal of theirs, because it really excites boomer men who are the most likely to go out and vote on election day,” Simpson said.