WATCH: How much has Trudeau’s brownface affected his polling numbers?

The images of Liberal Leader Justin Trudeau wearing brown and blackface have caught the attention of people beyond Canada’s borders, according to a new poll.

Sixty-five per cent of Americans are aware of the scandal, an Ipsos poll found. Of those 65 per cent, two-thirds said Trudeau should continue as party leader — 16 per cent said he should resign and 20 per cent said they are unsure. 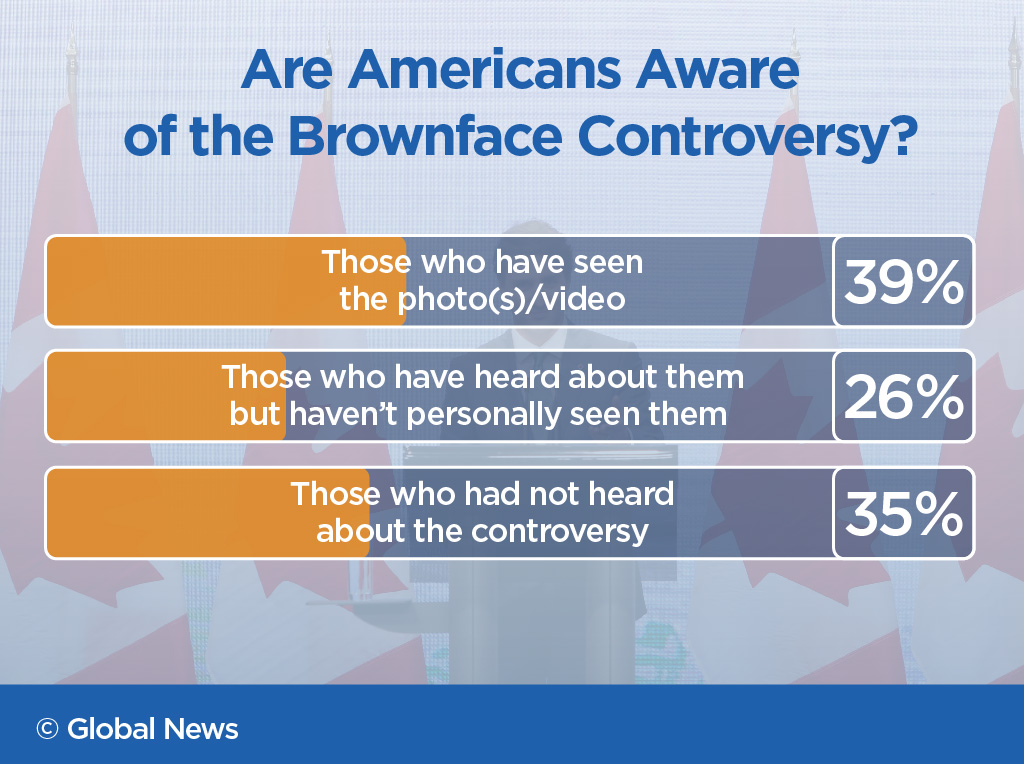 Americans who wanted Trudeau to resign were more likely to be men (22 per cent) than women (10 per cent).

Last week, photos and a video of Trudeau in blackface and brownface were uncovered.

The first picture to emerge Wednesday depicted Trudeau in 2001, when he was a Vancouver private school teacher, at an “Arabian Nights”-themed event, clad in an elaborate turban and robe, his face, hands and neck covered in dark makeup.

READ MORE:
Racism can become a political flashpoint — advocates say it needs to be a conversation

The second instance, which he admitted to while apologizing for the first, is a photo of him at a high school talent show performing the song Day-O “with makeup on.” Global News then published video that was shot in the early 1990s, and appeared to show Trudeau covered in dark makeup and raising his hands in the air while laughing.

Gregory Jack, the vice-president of public affairs at Ipsos, noted more Americans seem to be aware of this Canadian controversy than others.

“This issue played out internationally, those photos were seen around the world,” he said. 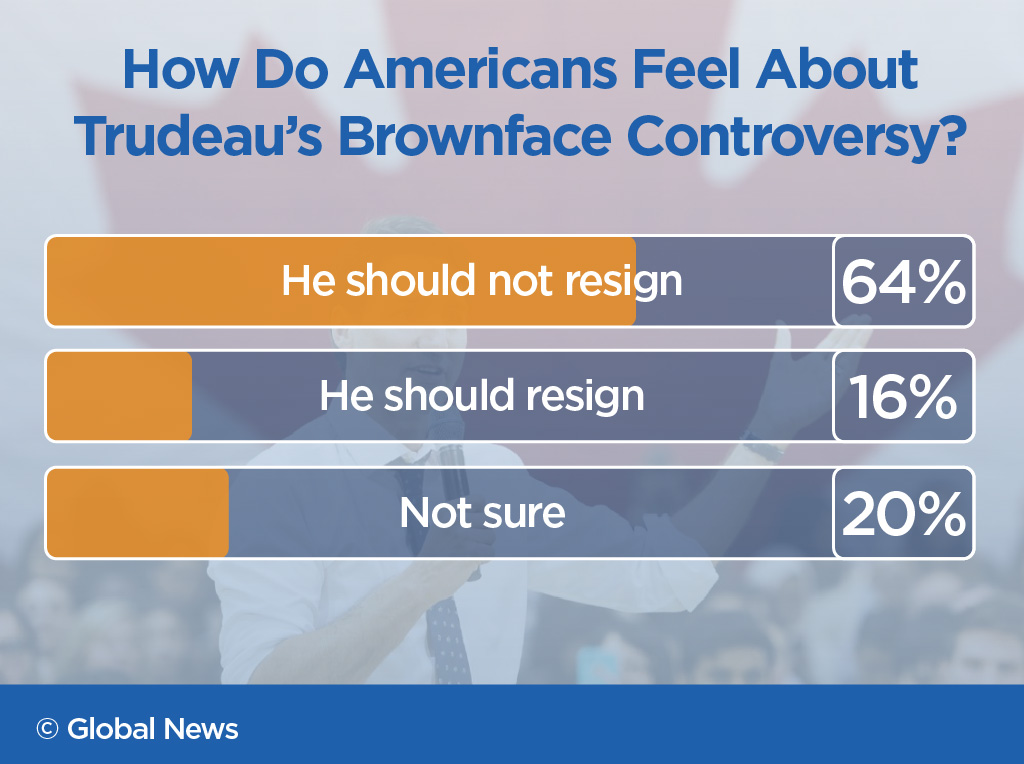 American opinions on Trudeau’s actions are fairly similar to those within Canada, he said.

“We found that the American view was very much aligned with the Canadian view, which was that Mr. Trudeau can continue and that his apology should be accepted.”

Forty-five per cent of Canadians found Trudeau’s apologies sufficient, and said he should continue his job.

Overall, the first Ipsos poll following the publication of the images — conducted between Sept. 20 and 23 — found Conservatives to have a four-point lead over the Liberals.

Trudeau apologized last week, just after the images were published.

Earlier this week, in his first sit-down interview since the controversy, he told Global News’ Dawna Friesen that he learned about the effects of racism in the years after his father’s death, and once he entered politics.

“The years involving my father’s death involved a lot of changes for me,” he said, noting he went back to school and became involved in environmental and youth activism.

Trudeau added that his perspective further changed once he entered his politics and spent time with the “diverse communities” in his Montreal riding.

“That’s why I understand now, which I should have understood then, that it (wearing racist makeup) is always unacceptable,” he said.

During the interview, Trudeau dismissed questions over whether he feels like he embarrassed Canada on the world stage in the aftermath of the scandal. He said the attention the brownface controversy has received internationally forces him to do more to “fight discrimination.”

Trudeau’s political opponents also spoke out following the publication of the images, expressing their dismay.

Conservative Leader Andrew Scheer chalked the incident up to Trudeau’s “lack of judgment and integrity.”

“Wearing brownface is an act of open mockery and racism,” he added on Thursday night.

NDP Leader Jagmeet Singh told Global News earlier this week that only Canadians can determine whether they will forgive Trudeau for this actions.

He went on to say there appears to be “two different Mr. Trudeaus” — one who supports multiculturalism in public, and one who mocks people of colour in private.

Green Party Leader Elizabeth May said last week she was “deeply shocked by the racism shown in this photograph of Justin Trudeau.”

This Ipsos poll was an online survey of 1,005 Americans conducted between Sept. 25-26. The precision of Ipsos online polls is measured using a credibility interval. In this case, the poll is considered accurate to within plus or minus 3.5 percentage points, 19 times out of 20.