WATCH: Immigrant Gerard Keledjian says he couldn't find a job in Canada, so he started his own media company.

Canada’s reputation of “welcoming” immigrants is one often cited by international rankings that list the country as among the best in the world.

But several recent polls show that Canadians themselves are increasingly critical of the country’s immigration policies.

Among them is a recent poll conducted by Ipsos Public Affairs on behalf of Global News, which found that 37 per cent of respondents believe immigration is a “threat” to white Canadians. Those who have university educations, at 27 per cent, were least likely to hold such views. Canadians without a high school diploma were most likely, at 46 per cent, to see immigrants as a threat.

All of the Ipsos poll data is available online. 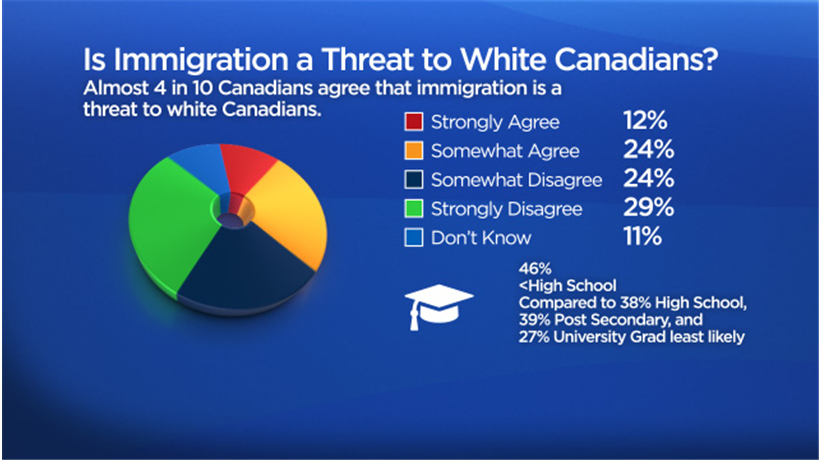 Sean Simpson, vice-president of Ipsos Public Affairs, explained to Global News that the “threat” in this case might include common fears that some Canadians may hold about immigration.

“For some people, it could mean an erosion of Canadian values — whatever those are,” he said.

“It might be the belief that people who are immigrating from other countries are a drain on the health-care system or the social assistance system. It may be that they’re taking jobs from other people.”

Simpson noted that the so-called threat can be “interpreted and defined” in different ways by different individuals. He also noted that roughly four in 10 Canadians view immigration negatively.

And it’s not just this poll.

Several other polls conducted in Canada recently have shown similar results indicating that Canadians are increasingly fearful of immigration and its impacts. An August 2018 poll by the Angus Reid Institute also found that half of Canadians want to see the government’s immigration targets reduced.

But experts say fears or hesitation over immigration aren’t backed up by the numerous studies done on topic — in Canada or around the world.

Here is a look at some of the fears surrounding immigration and what immigration experts have to say about it.

Will immigrants take all the jobs?

One common fear over immigration in Canada, as Simpson noted, is that those coming into the country will take jobs away from existing residents.

However, Parisa Mahboubi, a senior policy analyst at the C.D. Howe Institute for policy research, explained that immigrants are actually needed to sustain Canada’s job market.

For starters, Mahboubi explained that Canada’s aging population and slow birth rate mean fewer people will be of working age in Canada.

Immigrants are Canada’s biggest source of population growth — and that growth is needed to fill that void as well as increasing job openings that are left unfilled.

“The number of unemployed persons in Canada has declined, but at the same time, the number of jobs available that businesses want to fill has increased,” she explained.

Mahboubi noted that when unemployment rates decline, employers face difficulty hiring for certain roles because there are fewer people looking for jobs and thus fewer applicants.

However, newcomers to the country do face challenges settling in Canada, and Mahboubi explained that may be where some misconceptions arise — particularly the idea that immigrants are a strain on taxpayers and social assistance programs.

Immigrants are rebuilding their lives in Canada, she said, which comes with challenges such as a lack of credential recognition or language barriers.

“After the first year of arrival, they may have some difficulty finding the right job and they also face a higher unemployment rate,” Mahbouhi noted. “But immigrants, the longer they are in the country, their labour market outcomes improve.”

Mahboubi explained that there is no data that shows immigrants rely on social assistance programs more than other Canadian residents. Research shows that immigrants often come to Canada with savings and rely on that money while getting settled, she added.

The situation Mahbouhi describes reflects Gerard Keledjian’s experience. He arrived from Dubai as an immigrant eight years ago. The experienced journalist struggled to find work at a Canadian media company, so he did what a lot of immigrants do: he started his own business.

The company he launched, New Horizons Media, now employs 13. It produces videos for a host of different companies and non-profits and also produces a weekly TV program that features interviews and advice for new immigrants.

“I work with this team to help Canadian not-for-profits with their content. At the same time, we produce our own TV program to help newcomers understand life in Canada,” he says.

With rising rhetoric surrounding newcomers and security in other parts of the world, Simpson noted that similar themes are now present in the Canadian political sphere.

“There’s a growing movement in the United States, and some of it has a trickle effect here in Canada,” Simpson said, pointing to similar sentiments uttered by some federal and provincial politicians in recent months.

The fear of immigration threatening Canada’s security was brought up to Prime Minister Justin Trudeau at a January town hall.

Trudeau noted that Canada’s immigration system does a “very good job of not just having people come to Canada but setting them up for success, helping with integration, helping them thrive in our communities, helping them contribute to growing this country.”

Both of the latter agencies provide security advice to the IRCC on each applicant to ensure they are not a threat to national security.

Immigration lawyer Petra Molnar explained that there are actually no solid statistics that back up ideas that immigration leads to security problems.

“There are so many studies out there when you’re looking at Canada, United States and globally, that show immigrants are, if anything, lowering crime rates,” she told Global News.

Research on immigration and non-national security crime rates doesn’t back this the perceived threat, either.

For example, Statistics Canada data for Toronto has shown an inverse correlation between recent immigrants and violent crimes such as sexual assault, common assault and robbery.

The same research also found that “the higher the proportion of recent immigrants in a neighbourhood, the lower the rates of drug offences, all types of violent crime, mischief and other thefts.”

“Thus, all else being equal, high-immigration neighbourhoods generally have lower crime rates,” it added.

READ MORE: Canada is boosting immigration — here’s what the government is hoping to accomplish

Another so-called threat — rooted in the ‘The Great Replacement’ theory — is that immigration will wipe away the Canadian identity.

The replacement theory is one popularized by right-wing French philosopher Renaud Camus, the New York Times explained. It is the idea that white majorities will be overcome by non-white people and then lead to a cultural clash.

The theory is one often cited by far-right politicians and white supremacists in online propaganda.

Similar sentiments have been voiced in Canada. People’s Party of Canada Leader Maxime Bernier, for example, has said that immigration in Canada should be limited and offered to those who “share our Canadian values” and has spoken out against multiculturalism.

1/ Our immigration policy should not aim to forcibly change the cultural character and social fabric of Canada, as radical proponents of multiculturalism want. Of course, society is transformed by immigration. But this has to be done organically and gradually.

Molnar said these perceived threats are difficult to understand, seeing as Canada is a “nation of immigrants.”

“Unless you are Indigenous, we are all immigrants,” she noted. “A lot of this discourse is so polarizing, but when you break it down, we are on stolen land.”

Molnar explained that sentiments like protecting Canadian identity are often a way for politicians to speak to their bases by taking “complex” economic and political issues and creating a “palatable scapegoat.”

“Under the Harper era, it used to be the phrase ‘old-stock Canadians’ used to exclude the newcomers — but the difference might be a few decades,” she said.

“But it’s really easy to create this dichotomy of us and them.”

Methodology: These are the findings of an Ipsos poll conducted on behalf of Global news between April 8 and 10, 2019. For this survey, a sample of 1,002 Canadians from the Ipsos I-Say panel was interviewed. The precision of online polls is measured using a credibility interval. In this case, the results are accurate to within +/- 3.5 percentage points, 19 times out of 20, of what the results would have been had all Canadian adults been polled. The credibility intervals are wider among subsets of the population.

— With files from Jeff Semple and Jesse Ferreras