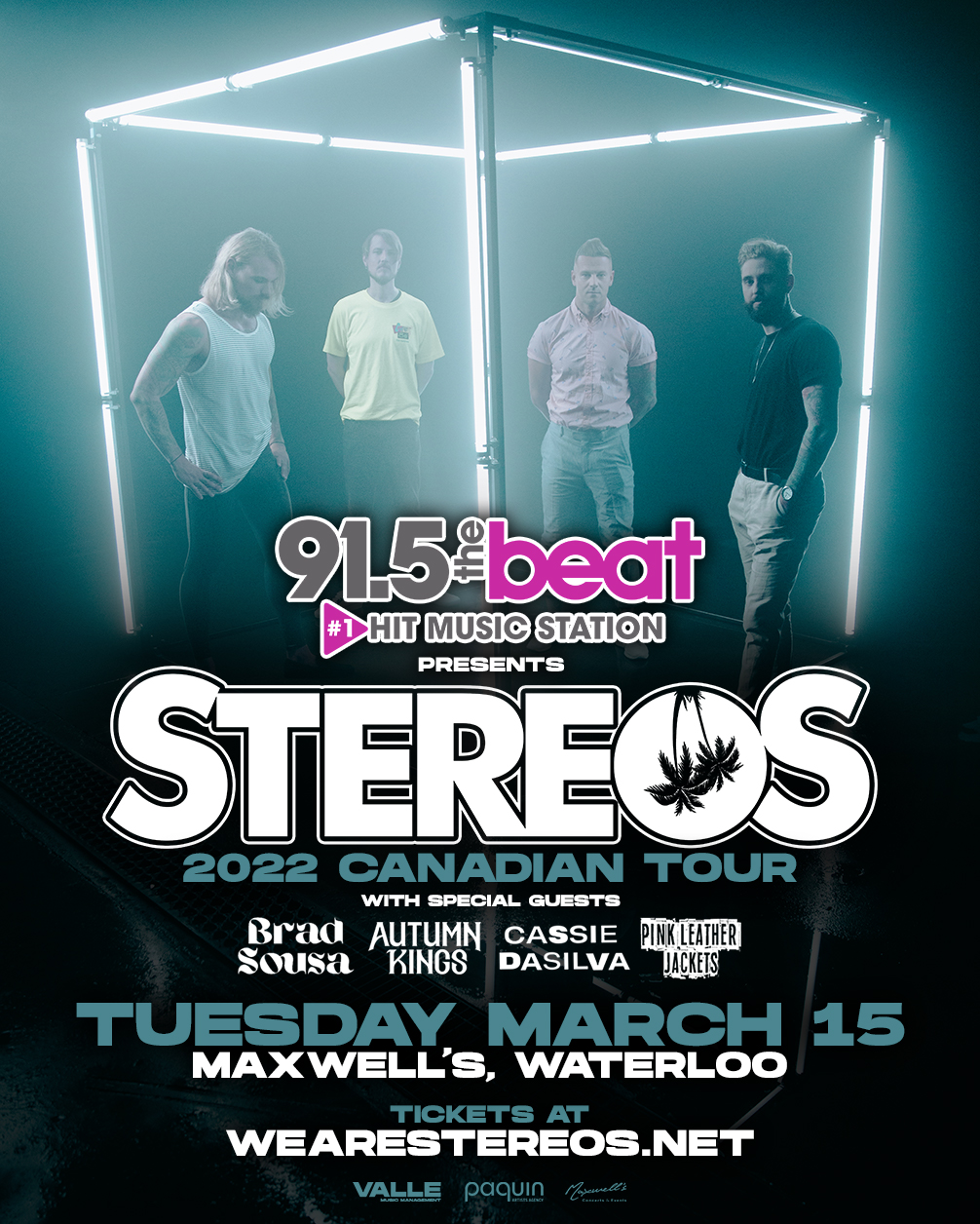 LATEST SINGLE AND VIDEO FOR ‘WAY BACK HOME’ OUT NOW

TORONTO, ON (November 22, 2021) – Today, Multi-Platinum, JUNO Award nominated pop act Stereos are pleased to announce their first national Canadian tour in over a decade. Set to kick off March 5 in Calgary, the freshly reformed band featuring original members Robb Chalifoux (guitar), Miles Holmwood (guitar), Patrick Kordyback (lead vocals), and Aaron Verdonk (drums), the band head back out on the road with a new sound; one that will evoke a powerful sense of nostalgia in fans and display their talents as individual players and the undeniable chemistry that drove their initial popularity.

Beginning March 5, at Calgary’s The Gateway, the 14-date Canadian run includes dates in Toronto, Kingston, Montreal, Halifax and more before wrapping in Fredericton on April 10. The Artist Presale begins Tuesday November 23 at 10am ET, followed by the LiveNation/FaceBook Presale which begins Wednesday November 24 at 10am ET. General public on sale is confirmed for Friday, November 26 at 10am ET with a limited number of VIP Packages which include an exclusive meet and greet and photograph with the band, early entry into the venue, an official VIP laminate and 20% off Stereos’ merchandise available for purchase. The tour includes special performances by musical guests Aaron Carter, Laur Elle, Brad Sousa, Autumn Kings, Kane Incognito, Cassie Dasilva, Pink Leather Jackets, and Kin Crew.

Stereos have released multiple tracks over the course of the last year including ‘Look Good’ and ‘Glory Days’, of which the band has shared, “It’s kind of a tongue-in-cheek nod to the fact that some people will look at the band reforming and say, ‘You’re just trying to relive the old days. You miss being the centre of attention.’ But to me, it’s like… You know how American Thanksgiving is notorious for everybody going back to their hometown, drinking at the same bars they used to, and hanging out? That’s the vibe we wanted. That’s how it was with Stereos every time we toured; seeing old friends and musicians we knew from the road, being in town for one night, and telling the same stories we told a million times.”

ABOUT STEREOS: Founded in Edmonton, Alberta in 2006, Stereos first gained notoriety after appearing on the Canadian reality TV show, Disband. Following the release of their self-titled, debut album Stereos, their popularity exploded, and on the strength of singles like ‘Summer Girl’ (3X Platinum), ‘Throw Ya Hands Up’ (2X Platinum) and ‘Turn It Up’ (Platinum), the band toured relentlessly, racking up JUNO Award-nominations for ‘Best New Artist’ and ‘Best Pop Album’ in 2010. Following the release of their 2010 album Uncontrollable, Stereos took an initial indefinite hiatus, but decided to part ways in 2012. After discussions began about a 10th anniversary reunion for the band’s debut, Andrew Valle of VALLE Music Management stepped in, booking shows in Toronto and Edmonton which sold out handily. Now working on a new album, set to be released in 2022, the band and JUNO Award-winning, Grammy nominated producer/engineer, David Mohacsi are channeling Stereos’ sound and influences both past and present, creating a tight set of chill-inducing pop tracks brimming with hooks and no holds barred performances, with their most recent single ‘Way Back Home’ showcasing a new direction and expansive powerful, pop sound.